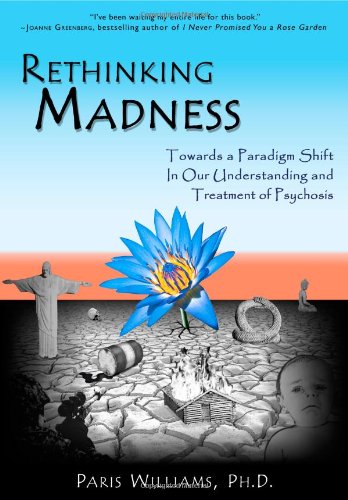 Williams, Paris.
Rethinking Madness: Towards a Paradigm Shift in our Understanding of Psychosis

As the recovery research continues to accumulate, we find that the mainstream understanding of schizophrenia and psychosis has lost nearly all credibility:

* After over 100 years and billions of dollars spent on research looking for schizophrenia and other related psychotic disorders in the brain, we still have not found any substantial evidence that these disorders are actually caused by a brain disease.

* We have learned that full recovery from schizophrenia and other related psychotic disorders is not only possible but is surprisingly common.

* We’ve discovered that those diagnosed in the United States and other “developed” nations are much less likely to recover than those in the poorest countries of the world; furthermore, those diagnosed with a psychotic disorder in the West today may fare even worse than those so diagnosed over 100 years ago. Purchase through Amazon