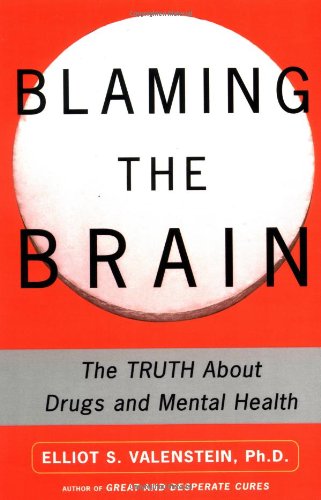 Valenstein, Elliot.
Blaming the Brain: The Truth About Drugs and Mental Health

Over the last thirty years, there has been a radical shift in thinking about the causes of mental illness. The psychiatric establishment and the health care industry have shifted 180 degrees from blaming mother to blaming the brain as the source of mental disorders. Whereas experience and environment were long viewed as the root causes of most emotional problems, now it is common to believe that mental disturbances– from depression and anxiety to schizophrenia– are determined by brain chemistry. And many people have come to accept the broader notion that their very personalities are determined by brain chemistry as well.

In his award-winning, meticulously researched, and elegantly written history of psychosurgery, “Great and Desperate Cures”, Elliot Valenstein exposed the great injury to thousands of lives that resulted when the medical establishment embraced an unproven approach to mental illness. Now, in “Blaming the Brain” he exposes the many weaknesses inherent in the scientific arguments supporting the widely accepted theory that biochemical imbalances are the main cause of mental illness. Purchase through Amazon