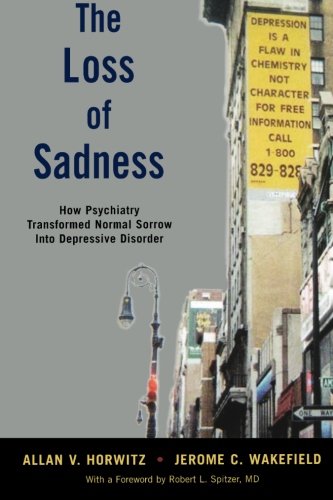 Depression has become the single most commonly treated mental disorder, amid claims that one out of ten Americans suffer from this disorder every year and 25% succumb at some point in their lives. Warnings that depressive disorder is a leading cause of worldwide disability have been accompanied by a massive upsurge in the consumption of antidepressant medication, widespread screening for depression in clinics and schools, and a push to diagnose depression early, on the basis of just a few symptoms, in order to prevent more severe conditions from developing.

In The Loss of Sadness, Allan V. Horwitz and Jerome C. Wakefield argue that, while depressive disorder certainly exists and can be a devastating condition warranting medical attention, the apparent epidemic in fact reflects the way the psychiatric profession has understood and reclassified normal human sadness. Purchase through Amazon