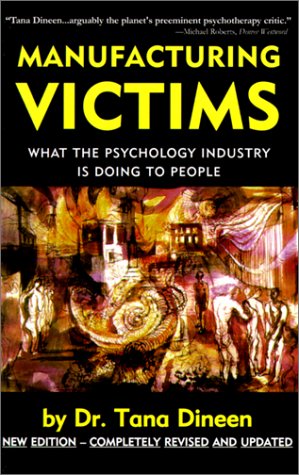 Dineen, Tana.
Manufacturing Victims: What the Psychology Industry is Doing to People

After thirty years in the profession, Dr. Tana Dineen has written an unflinching critique of modern Psychology and Psychotherapy. This controversial best-selling exposé of the Psychology Industry was first published in 1996. Now available in its revised, updated and less expensive 3rd edition, it is no less popular nor less explosive than when it first appeared. Cited in Time and the New York Times, among other wide-circulation publications, Tana Dineen’s scathing attack on the abuses and misuses of corrupted psychotherapy is a must read for care-givers and caretakers alike and for would-be caretakers too.

Topics covered include Victim-Making, Fabricated Victims, Selling Psychology as a Science, The Business of Psychology, The Technology of Victim-Making, The Rise to Power of the Psychology Industry, and Living in the Shadow of the Psychology Industry. Fully supported by end of book notes and index, and with a suggested reading list, this is one of the most important books on psychology to appear in recent years. The author has been often–and always unsuccessfully–attacked by representatives of corporate psychology who have resorted to character assassination rather than reason to try and prove Dr. Dineen wrong. Purchase through Amazon